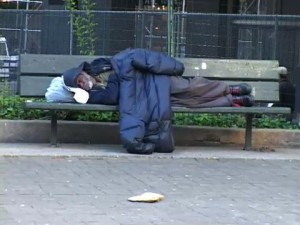 Recently I was in Washington, D.C. on business. I left my hotel one morning in a bit of a hurry. Instead of eating breakfast in a restaurant, I grabbed it to go and headed towards my office just a few blocks away. I started praying as I walked.

Immediately, I remembered a story I read in Nish Weiseth’s book Speak about a family who would always buy extra groceries to give to someone in need (a “plus one”) and they wouldn’t know who the person was until they drove around and found someone in need to give them to. So, I thought about who I could give my breakfast to. (I did not buy enough to really share. It was only enough for one, but I just knew in that moment what I was supposed to do.)

For those who haven’t been to D.C., there are homeless people on every block. I got excited at the idea of blessing someone with some food (even as I knew I would not eat any breakfast myself.) Unlike most of the homeless, I knew I would eat at lunch, so this wasn’t really much of a sacrifice the more I thought about it.

So I walked along towards the office looking around for someone. For three blocks I saw no one in need, which was very strange. As I circled the block that my office is located on, I wondered if I would have any opportunity to give away my breakfast and started to feel disappointed. Then, just before I reached the front entrance, I saw him.

A middle-aged, African-American man sitting on the steps of the Smithsonian Museum with a backpack, shaggy facial hair, and a winter cap. His legs were folded over each other in what could have been a yoga pose under different circumstances. He was across the street from me and I had to circle around some construction to make it over to the other side.

The more steps I took towards him, the more nervous I became. I was scared. Not that he would hurt me or anything, but just about what would happen. What would he say? What would I say to him? I approached him and saw he had his tongue sticking out and was looking up at the sky. Even as doubts swirled around in my head, I willed myself to keep walking and prayed to God to guide me with whatever happened.

“Excuse me,” I said. “I was wondering if you would like some breakfast?” I held up the paper bag.

“Okay. I have eggs, sausage, and then you can choose. Would you like orange juice or water?” I ask.

He picks the orange juice. I wonder why I made him choose and say “Would you like the water too?”

He says yes. I hand over everything. Then I ask him his name.

He nods his head and starts digging into the food.

“I hope you have a good day, Albert,” I say. I start to walk away. (I had a meeting to get to and he was occupied with the food.) Then he mumbles something. I ask him to repeat.

“Do you have any spare change?”

I do have spare change. I actually have cash for tips, cabs, etc. I pull out only a couple of dollars because I don’t want to think too long about it and felt a little weird debating with myself the proper amount to give with him sitting right in front of me.

I wanted to know more of his story. I wanted to sit down on the steps and listen to him, but I had a job to get to. So, I prayed for Albert as I rode the elevator up to my floor and tried to make sense of how my life could be so very different from his.

I’m glad I took the risk of bringing him my breakfast, but I also feel like I need to practice things like this a bit more and maybe I won’t be so nervous about it.

Maybe I’ll sit down and listen to his story.

Oh, and it turns out there was breakfast provided at my meeting when I arrived. Go figure.

***This is the first article in my series ‘Homeless in America’. I hope these stories will open hearts and minds to these people. I hope others will want to learn their names.

To The Man Who Has My Heart

To The Man Who Has My Heart (On the occasion of your 40th birthday) by Cynthia English To[...]

SPEAK, Even If Your Voice Shakes

I’ve never picked a word for the year before. Maybe it is knowing that my late, dear friend Becky di[...]

Stranger on a Train

In the stillness of a Saturday afternoon, I ponder What became of the stranger briefly shown R[...]

The Fog of Zeal

Most souls these days Exist in delirium A fog of zeal So sure of our own perspectives Right [...]
Menu Title