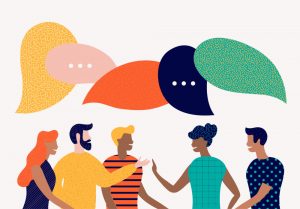 It took an insurrection for some, but I’ve seen clear lines drawn in the sand on social media – culling of friend lists and declarations for people to unfriend them if they don’t like what they have to say about politics (particularly the current President of the United States.) I get it. There is a time to pull back from the cacophony of voices and protect one’s self from perceived harm. After all, social media is not the public square and if one wants to engage only with those with whom they share specific values, it is their right to do so. (There is the very real danger of living in an echo chamber that can dilute one’s view of reality, but, on the other hand, emotional health is also important, and I do not begrudge people for curating their own social networks in a way that promotes their highest wellbeing.)

But, here’s why I don’t unfriend people on social media over political ideology: I was once caught up in fundamentalism. As a teenager, I was full of self-righteous certainty. It felt good to be so sure of everything. In my last article, “Blind Loyalty is Idolatry”, I explore the idol of absolute certainty, particularly when directed towards individuals or institutions. It is easy to confuse our own certainty with the actual TRUTH. After all, humans are not infallible. We’ve all been certain of something only to have reality confront us with unsettling truth: No, dear reader, there is no Santa Claus.

I’ve been listening to a podcast lately called Good in Theory. In the first two episodes the host, Clif Mark, summarizes Plato’s Apology, which is about the trial of Socrates – an ancient Greek philosopher who is widely held to be what Mark calls “the granddaddy of Western philosophy”. Socrates argues in his apology (defense) that his accusers are spreading lies about him, but the jury is not swayed – likely due to Socrates’ arrogance and continual ridicule of them. Socrates loses the trial and is put to death for the crime of corrupting the youth with his philosophical ideas, many of which involved questioning the status quo of ancient Athens. When practitioners of the status quo play judge and jury, dissenters are often silenced.

There are many parallels in the story of Socrates to today – and, as Mark points out, people like to claim these parallels whenever there is any threat (perceived or otherwise) to freedom of expression. However, the parallel I draw comes down to this – Socrates’ accusers told a good story and humans are easily manipulated by a good story, particularly if it casts us each as the hero with a clear villain who deserves punishment.

We just can’t resist the chance to ride the high of self-righteousness and right a perceived wrong in the world. So addicted are we to this high, that we are often blinded to any reason to doubt. Now, I can hardly blame us. Doubt is NOT fun. There is so little humans can control about our world. So, when we get a taste of power, particularly one that orders our world in a way we desire, it is very difficult to surrender this power. And doubt is a direct threat to that power.

Humans are so terrified at the notion of being on the wrong side and so arrogant in our confidence that we’re not, that we’re blinded to our own ignorance. Put simply, we don’t know what we don’t know, so we think we know enough to proclaim what is true and what is false. There are few absolutes that can be proven in this world, so why are humans so desperate to create them? Is it EGO? Survival instincts? Ignorance? Fear? All of the above?

Regardless of the answer, the pull of certainty is strong and to be surrounded by a community who validates our certainty only deepens that confidence that we have, in fact, found the TRUTH and others outside of that group have not. This inevitably leads to zealotry and, often, justification for committing harmful acts against the “out” group. I see the tell-tales signs of this strewn across social media – two sides pulling back and forth on the rope convinced they will ultimately win out in the universal struggle for TRUTH.

I know this feeling well and, frankly, I miss the high of zealotry. I miss the righteous work fueled by certainty. I see some of my social media friends steeped still in this world – each pulling on either side of the rope. Maybe it’s the researcher in me, but I’m interested in the differing viewpoints presented on social media. Sometimes it’s like slowing down to look at a wreck, but sometimes I learn something. I learn to see things from a different perspective. I also hope that those steeped in zealotry – as I once was – may also start to consider other perspectives too. Doubt is scary, but at least it’s honest and that is why I can sleep at night with the many questions of the universe dancing in my mind and the comfort of knowing the rope was never real to begin with.