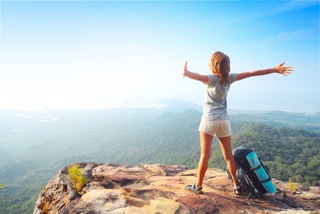 Last year I read a book that opened my eyes to a simple and beautiful way to live. The book “Love Does” by Bob Goff challenges readers to get up and do the things they want to do instead of dwelling on all the reasons they can’t do it. He champions acting on whimsy, risk-taking and even failing because it means you gave it a shot.

In my favorite chapter in the book entitled “Just Say Yes” Bob starts off saying “I used to think you had to be special for God to use you, but now I know you simply need to say yes.” He goes on to tell the story about how he became Consul to the Republic of Uganda. (It’s not my story to tell. You’ll have to read the book to find out.) The lesson in this chapter is to say “yes” first and then figure out the “how” later or don’t figure it out, but the point is to DO SOMETHING where you want to do something.

I don’t know about you, but I let fear hold me back a lot. I think about all the things that could go wrong. I’m a perfectionist, so I want whatever I do to be well-thought out and precise before I act on it. And, in some settings, that is appropriate. In other settings, it looks a lot like making excuses.

I’ve spent most of my life with a deep desire to help people, but I didn’t really know where to start. The problems were so big, so rather than let it overwhelm me, I tried to think of something else. Or I would think of reasons that I couldn’t help. I don’t have the time or money or special talent in the areas that would impact people the most. What could I possibly do?

After reading Bob’s book, I decided to see what would happen if I just said “yes.” I tried to navigate my thinking away from excuses and towards action. It sounds simple and logical, but it really took practice for me to do this.

Each time I thought about something that I wanted to do or heard about a need, I tried to think of how I could say “yes” to it. Sometimes I did something small that I knew would only help a little, but I did it anyway. And you know what? Sometimes the “small” things mean a lot to the people you help- like when I gave a banana, $2 cash, and a hug to a young man living on the streets of Chicago.

The greatest lesson I learned by saying “yes” more was that when I invite others to say “yes” too, big things can happen. When I saw a need and wanted to do something, I spread the word and together my friends and I were able to do so much more than I could do on my own.

It is a beautiful thing to bring people together to do good in the world.

Through this change in attitude, I took action in ways I never would have expected. I did more for more people. I challenged myself and learned beautiful lessons. I had adventures.

I also stopped being afraid of people with problems. I’ve talked with people who are homeless or dying and learned the truth: they are alive in ways many of us are not.

I’ve said “yes” in new and wonderful ways in the last year. As I look forward to the rest of 2015, I have a feeling that this is a year for more adventure- if only I have the courage to keep saying “yes.”