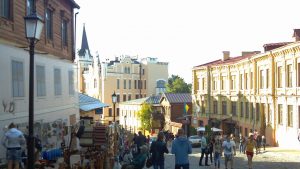 Kyiv, Day 1:
Today interviewing supervisors from all over Ukraine came to Kyiv for training. Some traveled as long as 8 hours by train. Surprisingly, I was able to follow a lot of the discussion in Russian, when I wasn’t day dreaming about the Tower of Babel anyway. For lunch, we walked a short distance to a pizzeria where I ate buillion (clear soup) and mushroom al-forno (potatoes, cheese, basil, mushrooms). After the training finished, my hosts (Katerina and Alexander) and I walked the streets of Kyiv for hours. For a large city with many people, it is very friendly and peaceful. Two observations: no one was in a hurry and everyone was in good shape.

A European football game had just let out and the fans’ excitement would rival even Lincoln on game day. We rode the subway and walked in the many underground pedestrian tunnels that fill the downtown. We enjoyed dinner at an outdoor cafe in the heart of the city. There we met an Australian man who travels for two months out of every year and was now currently spending a month in Ukraine. He once took a train across the U.S. and drank the drinking car dry. He travels alone. A local woman noticed and sat down next to him like she knew him and insisted on getting his phone number. She claimed to “rent out rooms”, but I have a feeling that wasn’t all she was renting out.

I saw much of Kyiv tonight, but the thing that will stick with me the most is not the beautiful architecture or the perohy and salad I had for dinner, but the peaceful hum of a beautiful people enjoying a Friday night.

Another wonderful day. I really wish I knew Russian. I am picking up only the words that are similar in English, but it’s enough to get by. At lunch Katerina and I talked philosophy and religion over borscht (a traditional and delicious Ukrainian soup) and ravioli with spinach. The Eastern Orthodox Church is very prevalent here and we talked about the differences between ritual spiritual discipline and celebrating God as worship. I told her about my church. She laughed at how different church can be in the U.S. She laughs a lot. I feel at home with her.

After the work day was done, Katerina, Alexander, and I ate at a very traditional Ukrainian restaurant. It is a really unique place. The whole thing is styled after different types of traditional Ukrainian homes. One section looks like a middle-class home and another section like an upper-class home. There are separate rooms to eat in that are styled like bedrooms. Here we talked about politics and music while we ate more borscht in a bread bowl with Ukrainian vodka (apparently it was “soft”, but it felt plenty strong to me), salo (pig fat) with rye bread, pampushki (a Ukrainian bread with oil), Kvasheniovochi (pickled vegetables), varenyky (like a perogy ate with sour cream), and Kompot (a drink made from dried fruits and berries). Great food and great company. We walked back to my hotel in rain. I will miss them when I leave on Monday morning. They said I should come back with my family to visit.

This morning when I arrived at the office for the final day of interviewer training, Katerina brought me into her office and gave me some gifts that they had bought for me. I am so touched! There is a traditional Ukrainian shirt for me, and sheep’s wool socks, a wooden, cat-shaped whistle, and a wooden flute for Emma. They are so sweet!

At lunch, Katerina, Alexander, and I talked about war, about life in the U.S. and then compared our currencies. We exchanged so we each could have currencies from the other’s country. Later in the afternoon they took me to Old Kyiv where we walked the old cobblestone streets, saw work from local artisans, and visited a great park with functional art imbedded into the landscape. Local musicians played traditional music throughout the park. We finished the evening at a lovely restaurant built into a hill in the woods. I tried Chicken Kyiv and ate a traditional Russian soup called Rassolnik. At the end of the night, it was hard to say good-bye to my new friends. I must come back here again. The people of Ukraine have made me fall in love with this place!

Now, in 2022:
I watch helplessly as events unfold; praying, crying for freedom to once again brighten this beautiful country and the families that call it home.